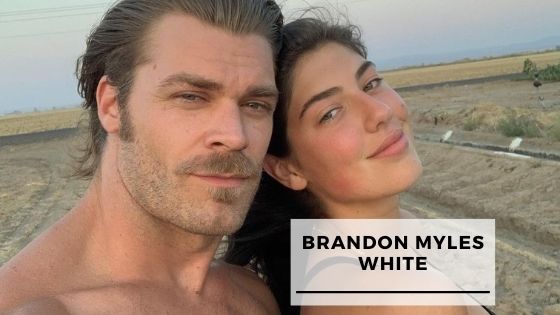 Brandon Myles White is one of the most famous fitness models in the world.

He has been featured everywhere, from ads to magazine covers.

His career has taken off lately, and he is becoming a household name in the fitness world.

This blog will take a look at his history, and what it was that got him started on this path.

In this post, you will find 10 pictures of Brandon Myles White from Buff Dudes with his girlfriend Mikayla Gill.

Top 10 Pictures Of Greg Doucette With His Girlfriend

Brandon Myles White is a bodybuilder, model, and actor. He is known as one of the Buff Dudes with his brother, Husdon White.

Buff Dudes is widely known for its entertaining fitness videos.

The Rise to Fame of Brandon Myles White

Brandon has a handsome look like a classic American. Starting from dreaming of becoming a bodybuilder, he is also now a model and social media star.

Brandon has always loved working out and physical fitness. He entered bodybuilding when he was only 19 years old and entered competitions.

This guy is fortunate to win competitions he competed in, leading him to model.

Brandon has been featured in Cosmopolitan, Fitness RX, Muscle & Fitness, and many more covers, magazines, and ads.

Aside from modeling, Brandon also took a shot at acting. He has acted in numerous productions, and one of them is the short film Necropolis Reborn. The short film won the Austin TX’s Alamo Drafthouse Film Festival Award.

He also starred in the docu-drama Silent Message, which tells about weighty issues and dealing with them to be a great actor.

Additionally, Brandon also worked with some of the great photographers like Impact Photography and Rick Day.

The Buff Dudes’ journey started when both of them were only 12 years old.

They usually see their father going to the gym after a protein shake drink every morning.

Additionally, they love browsing the Golden Era bodybuilding magazines that their father gave them. Since then, they became fascinated with bodybuilding and liked some well-known bodybuilders like Arnold Schwarzenegger, Steve Reeves, and Franco Columbo.

Of course, as they are young, they wish to follow in their father’s footsteps.

Their fitness journey started from there. These bodybuilding legends, including their father, inspired them.

They went through many trials and errors and worked hard in the gym to build their physiques.

As they continue to be inspired, Brandon and Hudson become experts in weightlifting.

2012 came, and these two brothers decided to combine their passions and professions: fitness training and editing videos.

In May 2012, Brandon and Hudson uploaded their fitness video. Many people find their videos very entertaining because of how they present themselves by being humorous and straightforward.

Brandon was responsible for the fitness training, giving educational and information advice about training and nutrition, while Hudson edited the video.

Starting from there, the Buff Dudes made a successful career in fitness.

Brandon and Hudson gained a lot of recognition and became an influencer in the fitness community in 2015.

The Buff Dudes have accomplished many things throughout their journey, including being Social Media Stars. They also built their own clothing line and became an online trainer and dieting coaches.

Brandon and Hudson train every day in the morning after their breakfast. Usually, they do steady-state cardio for 45 minutes.

The duo also train for weight training and another 30 minutes of cardio in the afternoon.

This routine is continued for six days, and on the seventh day, they rest for a full recovery.

They usually share their training and workout routine on their social media.

Aside from workouts, of course, healthy food must be on the list to stay fit and healthy.

Brandon and Hudson are very strict when it comes to food. Usually, they eat fish, egg whites, vegetables, and lean turkey. The duo believes in quality over quantity and prefers eating 2,500 calories worth of healthy meals.

Of course, they really don’t cut out on tasty food from their diet. When they lose weight, sometimes they eat whatever they want. If their cheat day comes, they love eating fries, pizza, burgers, and chocolate cake.

The Buff Dudes also share their fat-loss diet on their social media.

Brandon has been in a relationship with Mikayla Gill.

Unfortunately, there is not much information to share about their relationship and whether they are married.

Information about Mikayla is also unknown, for she keeps her social media account private. We know that Mikayla Gill is an online personal trainer who mentors clients for nutrition and exercise. She is also a YouTuber and part of the Buff Dudes.

See also  10 Pictures Of Gabriel Sey With His Wife & Children

But, we know that the couple is happily in a relationship and share their common interests like fitness.

Brandon usually shares photos of him and Mikayla on his Instagram account. He once posted a photo of them saying that Mikayla is his best friend, his love, and his workout partner.

The Buff Dudes represent an excellent way of living life to the fullest. They are all about being active and enjoying every second, which is something we could all learn from.

A large part of their success comes from their positive outlooks and willingness to have fun – even while working hard to achieve their fitness goals.

This is a great mindset to carry with you in all aspects of life, not just in regards to fitness, by always striving to be the best version of yourself and taking the time to have some fun along the way, as the Buff Dudes have done, greatness is sure to follow.

10 Pictures Of Gabriel Sey With His Wife & Children

11 Pics Of Fouad Abiad With His Wife