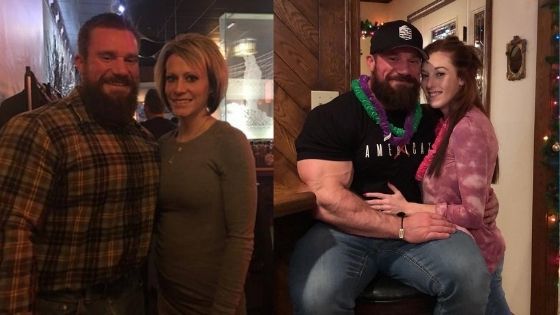 Who is Seth Feroce?

That’s the question you may be asking yourself. He is an American professional bodybuilder who has developed a cult following due to his exceptionally large body build.

In this post, you will find information and pictures of Seth Feroce’s new fiancée Hannah Nicole.

Seth Feroce, dubbed “Ferocious Feroce,” is best known as an American professional bodybuilder, podcaster, businessman, and entrepreneur; he has achieved notoriety for his bold podcasts.

He is an IFBB Pro League debut winner who has now become notorious for his no holds barred podcasts on YouTube.

Seth Feroce grew up in Pennsylvania, USA. As a fat kid, people would taunt Feroce, calling him “Chubbs.” He was overweight because his family assumed being healthy meant eating large amounts of food.

His father bought him his first gym membership, then after about two years, he hit a peak of 179 kgs at the age of 20.

Feroce decided to build himself up better this time by getting into bodybuilding. Two months later, however, he was already down to 162 kgs. Over the next few years, he continued for his physique comp and eventually won the Northern Natural Bodybuilding competition.

The Rise to Fame of Seth Feroce

After college, he worked as a safety consultant but realized this wasn’t his calling.

He dreamed of living the life of a bodybuilder one day, and to that end, he practiced this lifestyle of which he’d been dreaming since childhood – although he never pursued becoming a bodybuilder or competing professionally until encouraged by his wife to do so.

In 2003, he decided to embark on his bodybuilding journey and compete in the Northern Kentucky Championships holding winning places in both the heavyweight and super heavyweight divisions!

Not much longer after came second place at the Kentucky State Championships in 2004.

Seth was a student of Hany Rambod, who was known for his FST-7 Training System, which helped bodybuilders get that “championship-winning physique.”

He worked with him for over two years. He acquired sponsorship from the dietary supplement brand MuscleTech and the bodybuilding magazine Muscular Development.

He also worked with Isolator Fitness, a company that manufactures meal prep containers for health-conscious people.

When he was 25 years old, Seth won the 202 division of the Europa Super Show Bodybuilding Championship. This was quite an accomplishment as this was his IFBB Pro League debut, and he placed above veterans, including Jaroslav Horvath and Richard Jackson.

Before officially becoming an amateur pro, this qualified him to compete at the Joe Weider’s Olympia Weekend for the 202 showdowns.

Seth met Elise at college and had a daughter named Adalynne around the same time they married in 2011.

The family faced many challenges together, but after several years they felt things needed to change, so they were divorced in 2016; Seth was given full custody of their two daughters.

After divorcing his wife Elise Feroce in 2016, a year later, he met Hannah Nicole, to whom he proposed in 2018.

See also  Pictures Of Bodybuilder Jay Cutler With His Girlfriend

Seth’s been enjoying dating his girlfriend and fellow coach, Hannah Nicole. They met in 2017, and he proposed to her in December 2018.

Soon after, it was revealed that she was carrying their first child together and would have a baby boy.  In 2020, Hannah gave birth to a son.

Here is a picture of Seth Feroce’s ex-wife, Elise

13 Pics Of Hudson White (Buff Dudes) With His Wife