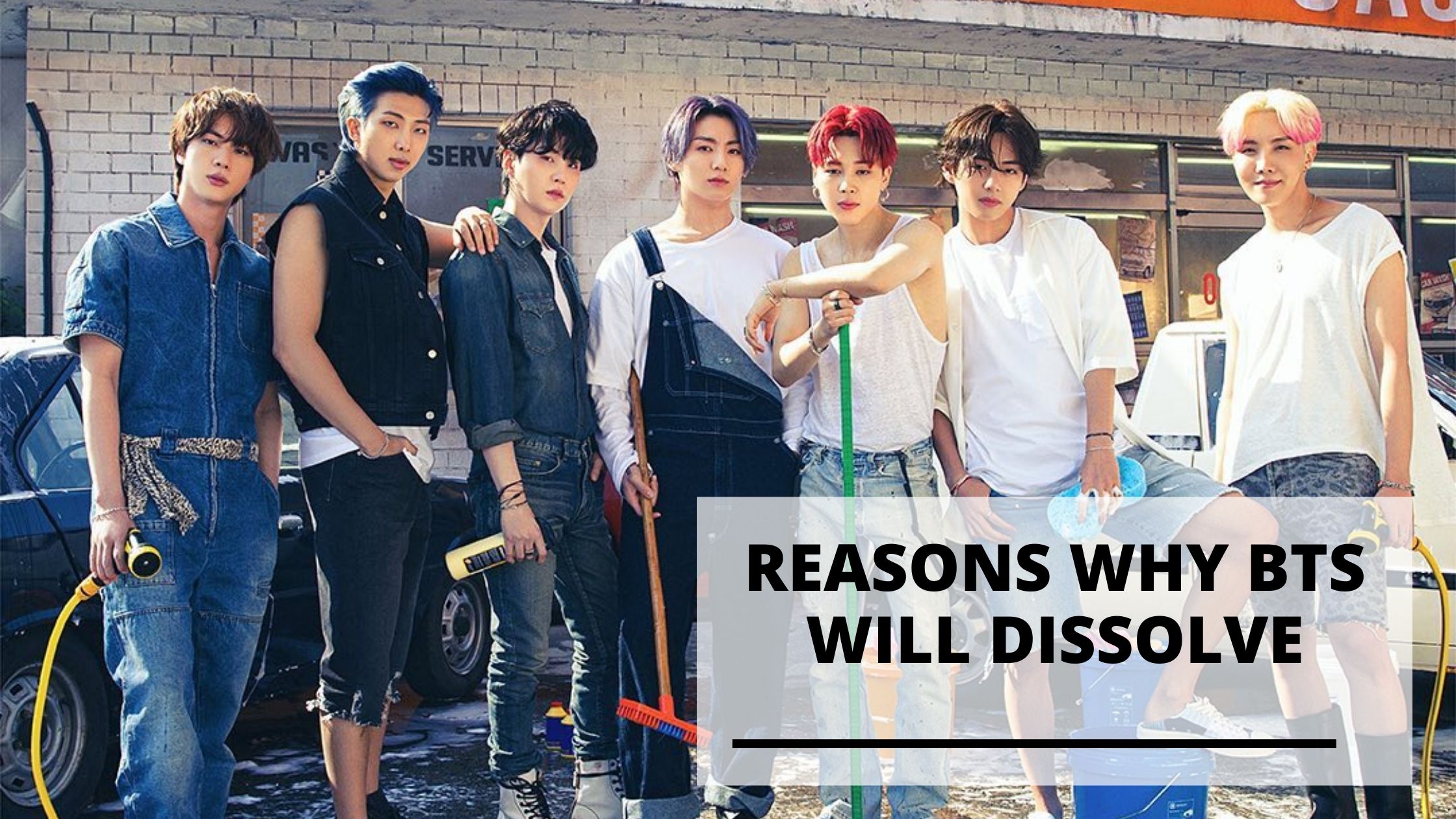 BTS is widely popular all over the world. But, another reason why they are a “talk-of-the-town” is their disbandment. When you search the internet, you will find that BTS has been dissolved. When is BTS dissolved? Are there any plans to disband after military service? Dissolution in 2027?

So, we investigated the dissolution of BTS, which has become a hot topic on the internet. It’s just shocking to think that the seven members of BTS who are very close to each other will be disbanded. But why will BTS disband?

Let’s see if this rumor is true or it will be.

BTS debuted on June 13, 2013. The Korean Boy Group is famous for being close to each other and known for their good balance, even though they all have different personalities.

Of course, there are quarrels and disagreements, but they’ll surely discuss these and resolve some issues.

At the time of the group’s debut, they only had a small office. So, rumors said they’ll disband soon and that their popularity had been sluggish for a while.

However, their song “I Need You” won first place in the running, and their popularity has spread. It won many awards that the group has worked hard so far together with their team, staff, producers, and everyone behind the group.

Now that they are at the height of their popularity, aren’t they going to dissolve? Some reasons went on and on from crises, ending of contracts, and so on.

Reasons for Considering the Disbandment of BTS

Many believe that there was a crisis of dissolution and its dangers.

In an interview at MAMA 2018, where BTS won Album of the Year and Artists of the Year, they gave a comment and a moving speech. J-Hope, who was always cheerful and the bright one in BTS, spoke up with tears:

“I was really worried before coming up (on stage). I always wanted everyone to see the best. I always wanted to see the perfect figure without failure before every time I came up to the stage. I think I’m preparing while being nervous. I think I was crying with or without this award. I had a lot of trouble, and I received a lot of love from everyone. So, I definitely wanted to give it back.”

From their speech, you can feel that there is a crisis of dissolution. Surely, most groups would feel this, that one day, there will be a time when certain circumstances will lead their group to dissolve.

What made this crisis of dissolution more evident is from the speech of the eldest member, Jin.

“Earlier this year, we were very hard mentally, and while we were talking, I was worried about whether to disband or not. But, I am very glad that I was able to tighten my mind again and get such a good result. I would like to say that I am very grateful to the members who worked hard once again, and thank the members who always love me.”

Imagine, that was 2018, and after working hard for 5 years, they had been discussing disbandment.

Causes of the Dissolution of BTS

BTS is becoming more and more popular, and it will look like there will be no element that will let them disband. However, there was a lot of trouble for the BTS members that may come up thinking about dissolution.

1. Direction of Each Member

Come to think of it, each BTS member would probably have different dreams, directions, and paths to take and think about their future.

There was an interesting answer from an Interview that Suga answered.

“You should be able to see the floor to some extent. Even with an airplane, if you can see the ground, you feel like you’re flying, but you don’t feel like you’re flying if you’re in the clouds. I’m very honored, but on the other hand, I sometimes wonder if this is all right, or is this what we really wanted to do.”

Suga is worried that the band will continue to be popular and wondering if this is okay.

“Even though everyone is riding on a huge advertising balloon together, it seems that the air does not escape, and it keeps rising all the time. I’m scared in situations where I’m likely to go to the atmosphere, the thermosphere, and even the universe. When I got on the balloon, I never thought I would go to space. I thought I would make a soft landing after floating a little in the atmosphere.”

It seems like the group is confused about how popular they are and how high they are soaring.

“Because of its popularity, there seems to be anxiety about the future.”

There seems to be a lot of pressure the group is taking.

Suga stated when they went to America, that pressure was beyond imagination, and he also talked about feeling the pressure.

BTS had overcome a great deal of difficulty to get this far. Bashers said they’ll be disbanded soon, while many Korean idols are working hard for their debut and struggling to make an effort.

Suga is pressured because of the group’s popularity, and they feel that they must remain popular.

“I didn’t cry when I did it. I was scared. More than I thought or imagined, in a sense, I wondered what to do in the future. I just liked the music and the stage, but the next album is more. I had to get good results, and I had to do better for others.”

The pressure would have increased even more because they feel that they need to meet the expectation of the ARMY, who are their fans.

THEY BECOME TIRED, DRAINED, AND OVERWORKED whenever BTS has live performances, official videos, upcoming albums, and shows. They’ve been working to the limit of performing, to the limit of physical strength, and performing immediately. This is because they wanted to show their best.

One reason why BTS will think of disbandment is quitting. Many are worried about Suga’s remark that he wants to quit when he can quit.

He also talked about leaving.

“I’ve seen so many situations that I can’t work as a singer after my heyday. I’ve always thought it’s better to quit when people blame and make fun of me.

I want to be on stage from the moment I get off until the end. I think that’s a nice way to quit.”

Did you know that BTS took a one-month-long vacation for the FIRST TIME since 2019?

As many BTS fans know, BTS is surely working really hard and is very busy. They prepare for months before their comeback, engaging in various activities.

Initially, the schedules of Korean idols were much tighter than in Japan. And with BTS being so popular, it is for sure that their schedule is much heavier.

Will BTS disband once they go to military service?

This is still unsure.

All seven members of BTS are subject to enlistment, especially since they are at the target age. This is one requirement in Korea that every man in the country must be enlisted in the military for 2 years when they come of age.

Jin’s military service deadline has been postponed since he must be enlisted by the end of 2022. Suga is also approaching the deadline. After that, J-Hope and RM will go, followed by Jimin, Tete, and Jungkook.

South Korea’s government considers the degree of contribution of BTS, and there are still plans to exempt them from military service. This will depend if the bills will be passed in the future.

But do you think there is a possibility of disbandment or dissolution if BTS goes to military service?

At this point, the possibility is there, but they’ll continue as they are.

It was said that BTS could be disbanded once in 2020 because their contract with their entertainment agency had expired. They had a 7-year contract from 2013 to 2020.

It was said that they could have been disbanded because most Korean idols often decide to disband at the point of their 7-year contract.

Of course, BTS renewed their contract and updated it to the 2020 to 2027 contract period.

Since their contract will expire again in 2027, the dissolution theory of 2027 has come out.

When Will the Contract End?

2027 is not the BTS contract expiration period. It turns out that the contract has been extended until 2024.

The group has been inactive due to a pandemic, and 2024 is near. Then, there’s this issue of military service, so many are wondering what other activities they are planning to do.

These reasons can happen, and many fans would not love this to happen for sure. But, considering these rumors, pressure, military service, and contracts, it is true that BTS could be in danger of breaking up.

They have talked about this before, and they were worried about the dissolution at the beginning of 2018. As they become popular, and the pressure has been more than anyone can imagine, it could be possible that they could break and proceed with the life they dream of.

Moreover, the attention is also focused on them being in military service. Plus, the possibility of ending their contract.

What’s important is to continue being a fan, support them all the way, and never give up on them. If they decide to go separate ways, be there for them and still give them the love and support you have given them as they are beginning.