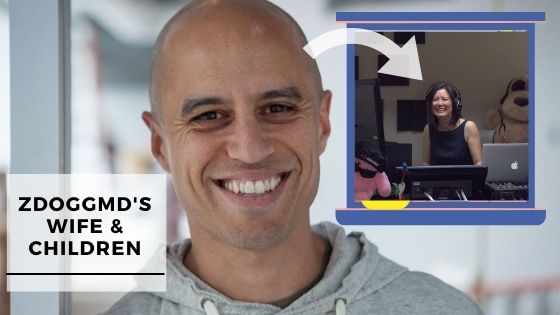 Dr. Zubin Damania, or ZDoggMD, was born on April 23, 1973, in New Jersey, US. He grew up in Clovis, California, where everything started for him and where he is right now. He graduated high school in Clovis West High School and went to UC Berkeley, where he received his undergraduate degree. It’s interesting because he minored in music, which is different from his major in molecular biology and cell biology. After that, he finished his internal medicine residency at Stanford University School of Medicine.

After graduating and achieving this far, he stayed in Palo Alto Medical Foundation as a hospitalist for ten years. At the same time, he is an Adjunct Clinical Assistant Professor of Medicine at Stanford University Hospital and Hospital in Fremont, California. One greatest accomplishment of ZDoggMD is completing his research thesis with James Fristrom.

In this post, you will find rare photos of Dr. Zubin Damania also known as ZDoggMD alongside his wife and children.

The Rise to Fame of ZDoggMD

ZDoggMd gained the attention of many as an American physician who founded Turntable Health, a primary care clinic in Las Vegas. While working as a hospitalist in Palo Alto Medical Foundation and Adjunct Clinical Assistant Professor of Medicine in Stanford University Hospital and Hospital in Fremont, California, he received a Russell Lee Award for Clinical Teaching. That’s a “wow” to many.

Aside from being in the medical field, he has a side hobby as a stand-up comedian where his audiences are from the medical field worldwide. He became more popular when he performed as a musical comedian, which started the name ZDoggMD.

His YouTube Channel, ZDoggMD, shares parodies, music videos, medical issues, and comedy sketches, which is really not boring to many people. He gained a wide audience in the medical field, comedy, and regular individuals looking for fun.

Dr. Margaret Lin is a board-certified radiologist specializing in lung and airway diseases like infection and cancer. Aside from that, she is training in cardiovascular imaging.

Take a look at these rare and beautiful pictures of Dr. Zubin Damania with his wife Dr. Margaret Lin

What is ZDoggMD specialty?

Zubin Damania, or what everyone knows as ZDoggMD, is the founder of Turntable Health, a primary care clinic in Las Vegas. He is widely known for his comedic sketches, parodies, music videos, and medical topics on his YouTube channel.

Why did Turntable Health close?

Turntable Health, owned by ZDoggMd, Zubin Damania, was shut down because of funding. The company’s partner, Iora Health, didn’t continue as well for financing Turntable.

Zubin Damania is in a clinic in downtown Las Vegas, Downtown Project.