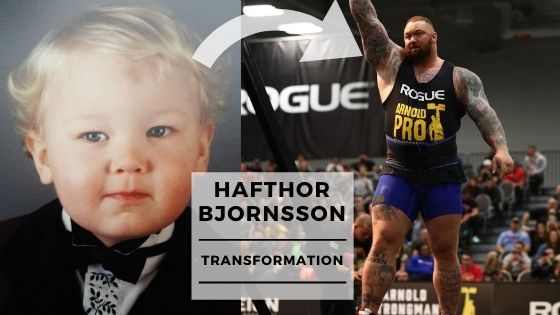 Hafþór Júlíus Björnsson, in English, Hafthor Bjornsson, was born on November 26, 1988, in Reykjavík. He is a retired Icelandic Strongman athlete. He has won many major Strongman titles and has also appeared in Game of Thrones for five seasons, playing the role of Gregor “The Mountain” Clegane.

In this post, you will find rare pictures of the transformation of Hafthor Bjornsson from 1 year old to the star he became right now.

The Rise to Fame of Hafthor Bjornsson

Hafthor Björnsson is an Icelandic actor and professional strongman. He is known for playing Gregor “The Mountain” Clegane on the HBO series Game of Thrones. Hafthor has won the Arnold Strongman Classic, Europe’s Strongest Man competition, and World’s Strongest Man in the same year — his first time competing.

Hafþór entered the world of basketball in 2004 with the Division I team Breiðablik. He transferred to FSu in 2005, moved to Premier League side KR in 2006, and returned to FSu in 2007. He helped bring his team from Division I to the Premier League, but because of a recurring ankle injury, his career was cut short. His future then changed course, and he began his strongman career.

Hafþór is famous for his victories at the Strongest Man in Iceland event in 2010 and the Icelandic Strongest Man in 2011. In 2014, he won Europe’s Strongest Man and repeated the victory in 2015, 2017, 2018, and 2019. He won silvers and bronzes in his next few World’s Strongest Man competitions – no more, though! He also won his gold in the Arnold Strongman Classic.

Hafthor is not only a basketball player and a strongman. He is also a boxing champ, where he defeated several boxers, including Eddie Hall.

At the age of 28, Hafthor Bjornsson was diagnosed with Bell’s palsy, a facial paralysis where the patient loses control of half their face

Here is a video of Hafthor himself explaining his condition

Moreover, he also began his acting career in 2013. Hafthor is best known for his role on HBO’s Game of Thrones. In 2013, he was cast as Ser Gregor “The Mountain” Clegane., making this his first main acting role.

Get to Know Hafthor Bjornsson Relationships

Hafþór is a father. He has a daughter with his ex-girlfriend Thelma Björk Steimann. Until late 2017, he dated Andrea Sif Jónsdóttir. They lived together in Reykjavík until she broke it off.

Hafþór’s life has been one event after another. In late 2017, he met Kelsey Henson, a waitress from Canada. They started dating, and Hafþór got to know Kelsey better when he traveled there for a strongman competition in 2018. Things are heating up again because the two just got married! The big day happened on October 21. On September 26, 2020, the couple had their first son, Stormur Magni Hafþórsson.

How did Hafthor Bjornsson get so big?

Hafthor had to have surgery. After his second operation, he took a break from basketball to help his foot. He trained hard and fell in love with weights. He started putting up some weights, and there he became strong.

Bjornsson announced that he is already done and would never compete for Giants Live and World’s Strongest Man in one of his live shows on Twitch.

Why is Thor’s face paralyzed?

Half of Hafthor’s face is getting paralyzed due to Bell’s Palsy.