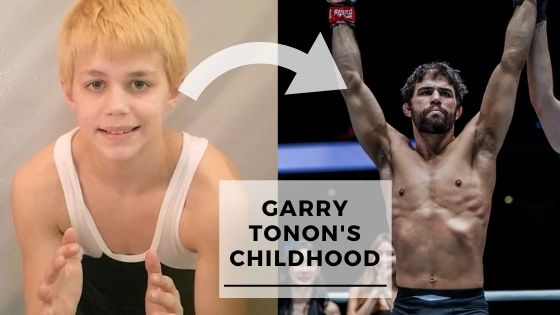 Garry Tonon is a champion grappler and mixed martial artist who has won titles in the Eddie Bravo Invitational at the ADCC Submission Wrestling Championship, BJJ Worlds, and IBJJF Pan American Championships. He was born on September 12, 1991.

Tonon had ADHD as a kid, but he found a sport that helped him with that—wrestling. He loved the sport so much he did it throughout his teenage years. It helped him cope with his ADHD, and it probably helped shape his grappling style.

Tonon is a Brazilian jiu-jitsu black belter with a background in folkstyle wrestling. He is the head instructor of Brunswick Biji dojo in South Brunswick, New Jersey.

Take a look at Garry Tonon’s transformation from 4 years old to the BJJ star he is right now.

In this post, you will find rare pictures of Garry Tonon’s childhood alongside his family.

The Rise to Fame of Garry Tonon

Garry Tonon, who is known for his signature use of leglocks in submission-only grappling matches, is part of the “Danaher Death Squad” — a group of young grapplers trained under John Danaher. Tonon has also focused on mixed martial arts and debuted earlier in the year 2018.

Through the Years: Garry Tonon

Looking back at Garry’s early days, he grew up in a small town in New Jersey and lived a normal life. Since he was young, he played sports in the Boy Scouts and enjoyed the childhood that most kids only dream of.

See also  Rare Photos Of Mark Bell With His Wife

When he was little, Tonon was diagnosed with ADHD by his mom, a non-profit organization employee for kids with special needs. In 5th grade, Tonon joined the wrestling team at his school. For the next few years, Tonon continued to wrestle until he reached his freshman year of high school. Tonon credits his time at wrestling and martial arts with helping him to deal with ADHD and says it partially influenced his grappling style.

Garry Tonon at 4 years old with his sister

And just when Tonon thought his life couldn’t get any better, he was later diagnosed with alopecia areata. While the condition isn’t typically life-threatening, his hair has progressively fallen out. He attended Lacey Township High School in Lacey Township, New Jersey, and graduated in 2009.

Garry has been a BJJ practitioner since he was 14 years old, and over the years, he has competed in tournaments and championships throughout the country. This past year he started training under John Danaher at the Renzo Gracie Academy.

When Tonon began training at his friend’s jiu-jitsu academy, he noticed that the classes focused on mixed martial arts and not jiu-jitsu. He soon left that school and found a new academy called Ocean County Brazilian Jiu-Jitsu, run by Tom DeBlass. Tonon found the school’s focus to be much more in line with his interests, and he began attending two jiu-jitsu classes each day. One day, Tom DeBlass mentioned to Ricardo Almeida about Tonon’s interest in the sport, and Tonon began going to Almeida’s school for additional training.

2008 was a big year for Tonon. After training with DeBlass and Almeida for about a year, Tonon won the IBJJF World Championships in the Blue Belt Juvenile Division. Tonon went on to graduate high school in 2009 and attended Rutgers University. Tonon continued his rigorous training schedule and competed in local and international competitions. He remained in the gi until 2012, but he began learning more from John Danaher and eventually earned his black belt in 2013.

Top 10 Pics Of Katie Dunlop With Her Husband