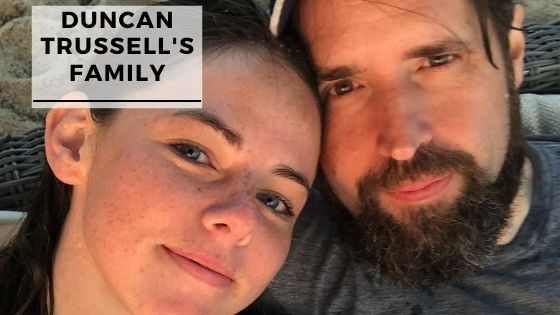 Charles Duncan Trussell was born on April 20, 1974. He is an entertainer, actor, and comedian who hosts his own podcast named The Duncan Trussell Family Hour. As one of the most popular podcasters in the world, he can help a lot of people with his opinions and insights that he shares on a weekly basis.

It’s no secret that he has been a user of psychedelics. He sees their capabilities as something to be valued significantly because they have helped him to expand his consciousness and therefore enable him to create some great podcasts which can help those around the world who happen across them positively on a daily basis.

On December 14, 2012, Trussell was diagnosed with testicular cancer, and fortunately, the cancer was successfully treated.

In this post, you will find rare photos of Duncan Trussell alongside his wife and son.

The Rise to Fame of Charles Duncan

When Trussell first started out in comedy, he took a job answering phones for the Comedy Store. He learned about the importance of professionalism and how to give his best effort to every task assigned to him. Within a few years, Trussell was promoted from answering phones to delivering comedians’ sandwiches and even driving around his mentor Mitzi Shore. Spending extra time with both Mitzi and other comedians at the club helped shape him into the comedian he is today.

Duncan appeared on MADtv in one of his early acting roles as he made one of his first screen appearances; he also co-hosted “The Lavender Hour” podcast with Natasha Leggero. Then, he voiced the moth character, Dave, on an episode of the HBO animated show Animals. He hosted the pilot called Thunderbrain, a comedy science pilot for Comedy Central.

The podcast that Duncan is currently hosting is called “The Duncan Trussell Family Hour” and invites guests for about 60 minutes of free conversation each episode.

Duncan Trussell has been married to Erin Trussell since 2018, and the couple has one son. Erin was born on September 12 in Los Angeles, California, to American parents.

Although Duncan Trussell is proud to show his wife Erin Trussell on his social media posts, he never posts photos showing his son’s face, and sometimes, he even puts an emoji on his son’s face to avoid revealing his identity.

Here are rare photos of the Trussell family

BONUS: As a bonus for our readers, here are a couple of never seen photos of a very young Duncan Trussell

Check out some of his famous quotes:

“True healing is realizing that you were never sick in the first place.”

“The universe loves you, you are completely embraced by the entire universe.”

Is Duncan Trussell a billionaire?

Duncan Trussell is an American standup comic, actor, and podcast host who has a net worth of $500 thousand.

How did Duncan Trussell get famous?

Trussell started answering phones at the Comedy Store but quickly moved up to errands to chauffeur, and he soon found himself part of Mitzi Shore’s comedy entourage.