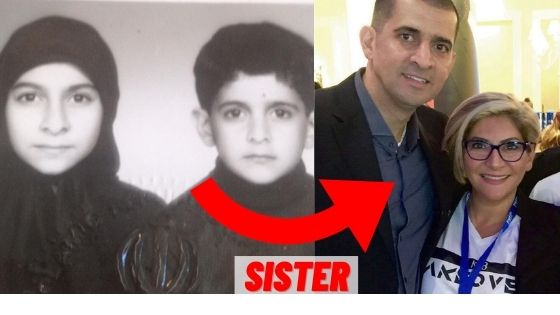 Patrick Bet-David is the creator of Valuetainment, which is a YouTube channel featuring entertaining conversations with entrepreneurs like Tony Hsieh, Magic Johnson, and Mark Cuban. He was born in Tehran, Iran, on October 18, 1978.

In 2008, he attended Harvard Business School, where he began his career as a business advisor and consultant. He also shares some motivational and inspiring stories on his social media or YouTube, which helps entrepreneurs to build wealth and achieve financial independence by teaching them specific strategies for opportunities, marketing, or starting their own business from scratch.

In this post, you will find information and rare photos of Patrick Bet-David’s parents and sister.

Patrick Bet-David has only one sibling, an older sister named Polet.

Patrick Bet-David and His Family

Patrick Bet-David’s father is Gabriel Bet-David, but his mother’s name is unknown because of personal privacy. Patrick’s journey to success begins with his family immigrating to the United States when he was 12 years old. Though he moved his family to a safe haven, he would have been drafted into the army against their wishes. His parents fled Iran during the Iranian revolution, and they were eventually granted citizenship.

Patrick was born to Armenian and Assyrian parents in Iran in 1978. During the war, he and his father fled the country seeking solace in Germany before getting settled in the States after migrating there from their native Armenia. Patrick came to America, relocated to Glendale, California, and became a US citizen as a result. As he became a citizen eventually, he went on to join the US Army.

Here is a photo of Patrick alongside his sister Polet

See also  12 Best Photos of Yris Palmer and Her Family

Although the Bet-David family was Christian, their women and young girls had to wear Hijab in Iran

Patrick with His Sister Polet

Get to Know Polet Bet-David Sabetimani

Polet Bet-David Sabetimani is Patrick’s sister. When Polet was a kid, she wanted to invent something like a device and be awarded because of it. Today, she is an entrepreneur, a mom, and one of the board of PHPladies. She also volunteers at Real Life Church.

Polet studied Business Administration and Management, and now she is the Senior Vice President of PHP Agency, Inc., which her brother, Patrick Bet-David, founded. She is also a founder of Kingdom Builders,

Polet sitting at her brother’s desk in Valuetainment headquarters

A baby Patrick Bet-David with his mother

7-year-old Patrick Bet-David alongside his father

On many occasions on his show, Patrick speaks with high regard for his father, and he considers him his first and biggest hero in life. For Patrick, the fact that his father gave his whole life to bring his children to America from Iran was the most significant gift he offered his offspring.

Patrick Bet-David alongside his father when he joined the military

On many occasions on his show, Patrick speaks with high regard for his father, and he considers him his first and biggest hero in life. For Patrick, the fact that his father gave his whole life to bring his children to America from Iran was the most significant gift he offered his offspring.

What an incredible journey! So many ups and downs, but they have not prevented him from learning valuable lessons which he has applied to his business. He spent some time in the Army, working for Morgan Stanley, to get where he is today as a successful CEO of an insurance company and a channel that regularly conducts talks in collaboration with other entrepreneurs.

Over the past years, Patrick has experienced nearly every aspect of what it takes for a person to pursue the American dream. To begin with, he was an immigrant from Iran, which is already difficult enough in its own right. While building his own empire along the way, Patrick has always managed to stay grounded as he sees what life can be like without all of his advantages, which helps him value hard work and never take anything for granted – two values that entrepreneurs everywhere must embody to succeed.

Top Photos Of Mike Diamonds With His Girlfriend

10 Rare Pictures of Ricky Gutierrez With His Current Girlfriend

10 Pictures Of Chris Sain With His Wife