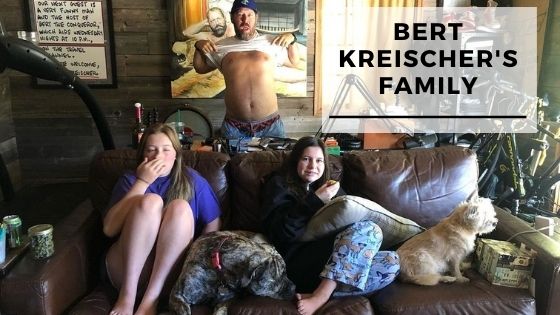 Albert Kreischer was born in St.Petersburg, Florida, on November 3, 1972, and raised mostly in Tampa. He was born to parents whose professions revolved around early childhood development and real estate law, respectively. Albert attended a private Jesuit high school during his teenage years, and then he later majored in English at Florida State University before meeting the fine folk of Alpha Tau Omega. He was featured in Rolling Stone as “the top partier” at Florida State University during his sixth year of college.

In this post, you will find photos of Bert Kreischer alongside his wife and two daughters.

The Rise to Fame of Bert Kreischer

Kreischer’s first exposure to stand-up comedy was at Potbelly’s, a bar and nightclub in Tallahassee, Florida. After moving to New York City, he began working the door at the now-defunct Boston Comedy Club.

Kreischer worked hard and one day earned himself some luck when he got invited by a talent scout to come to watch some shows at some of the best comedy stands in New York City. During those years at Boston Comedy Club, he worked as a bouncer and is especially known for performing stand-up comedy while shirtless. Kreischer is well known for his storytelling; he tells about how he earned the nickname “The Machine.”

Bert Kreischer and LeeAnn have two daughters! Georgia was born in 2004, and Ila in 2008. Bert often jokes that since both of his kids are girls, they have avenged him for all of the foolishness he has committed in his life. People often see Bert on stage relating stories about how crazy his kids are.

Get to Know LeeAnn Kreischer

LeeAnn Kreischer grew up in a small town in Bowdon, Georgia, and is a host of Wife of the Party, a weekly podcast that analyzes comedians’ careers as their wives and girlfriends tell. LeeAnn and her comedy partner, Bert Kreischer, have been married for almost two decades. In one interview, LeeAnn revealed that she thought Bert wasn’t “marriage material” at first, but now they are happily married.

How did Bert Kreischer get famous?

Kreischer first tried performing comedy in New York City, even though he had never done it before after a tape of his comedy set was sent to a talent agent who invited him to the city. While he was working at the door of the popular Boston Comedy Club in NYC, Kreischer watched many stand-up shows and began to get friendly with other comedians, particularly Colin Quinn and Louis CK. Early in his career, he became known for performing stand-up comedy while shirtless.

See also  10 Craziest Pics Of Steve-O With His Fiancée

What does LeeAnn Kreischer do?

LeeAnn Kreischer is an American actor, writer, and podcaster. She is the wife of stand-up comedy actor Bert Kreischer.