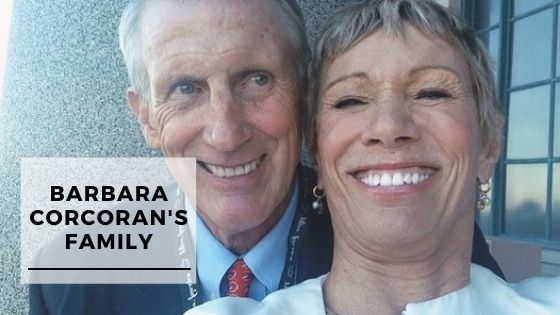 A woman in business! Meet Barbara Corcoran, born on March 10, 1949, in Edgewater, New Jersey. She is an American businesswoman, a television personality, speaker, investor, author, and consultant.

Barbara is the second child of her mother, Florence, and her father, Edwin. She has nine other siblings, and their family delivers free food from a local grocer.

Barbara has dyslexia which is why she struggled with schooling. She went to a Catholic elementary school in her town and had her high school days at St. Cecilia High School, then eventually moved to graduate from Leonia High School.

In 1971, she graduated with a degree in Education from St. Thomas Aquinas College.

In this post, you will find information and pictures of Barbara Corcoran’s husband and children.

Pics Of Marko Of WhiteBoard Finance With His Wife

Who Is Kevin Ward’s Wife?

The Rise to Fame of Barbara Corcoran

When Barbara was 23, she had already worked a total of 20 jobs. When she was a waitress, her boyfriend encouraged her to work at a real estate company. Since then, she has dreamed of being her own boss.

She worked as a receptionist in Giffuni Brother’s real estate company. While working there, she co-founded The Corcoran-Sinomè with her boyfriend from a $1,000 loan.

However, the two split up after being together for seven years when his then-boyfriend told her he would marry her secretary. So, she built her own real estate company.

Barbara founded a real estate brokerage called The Corcoran Group, located in New York City, but then she sold this to NRT for $66 million.

She is also a well-known columnist for The Daily Review, More, and Redbook. She authored several books and is writing a weekly column for New York Daily News.

Barbara is also the host of The Millionaire Broker with Barabara Corcoran on CNBC.

Barbara Corcoran has been married to Bill Higgins since 1988. The couple has two children, their son Tom and daughter Kate.

Barbara Corcoran did not start a family until she was 46 years old. She gave birth to her son Tom in 1994 via in vitro fertilization, then ten years later, she adopted her daughter Kate.

Scroll down to see pictures of the whole family

Photos of Barbara Corcoran with her husband Bill Higgins

Barbara and Bill met at a conference in 1981. There were plenty of people who wanted to meet Barbara at that time, and Bill patiently waited to have a conversation with the real-estate queen.

At first, Bill was only interested in meeting Barbara for business purposes. Barbara, on the other hand, fell in love with Bill.

After a few business meetings, Barbara asked Bill to spend a weekend with her, but Bill turned it down. This made Barbara more interested in Bill.

Barbara continued to pursue Bill until the two were officially dating. She then moved in with Bill with his four children, and after two years, Bill had a surprise proposal in Norway.

Get to Know Bill Higgins

Bill Higgins had a previous marriage where he had four other children.

He spent most of his life serving the country. He enjoyed his six decades in the Public Service industry

Barbara Corcoran with her children Tom and Kate