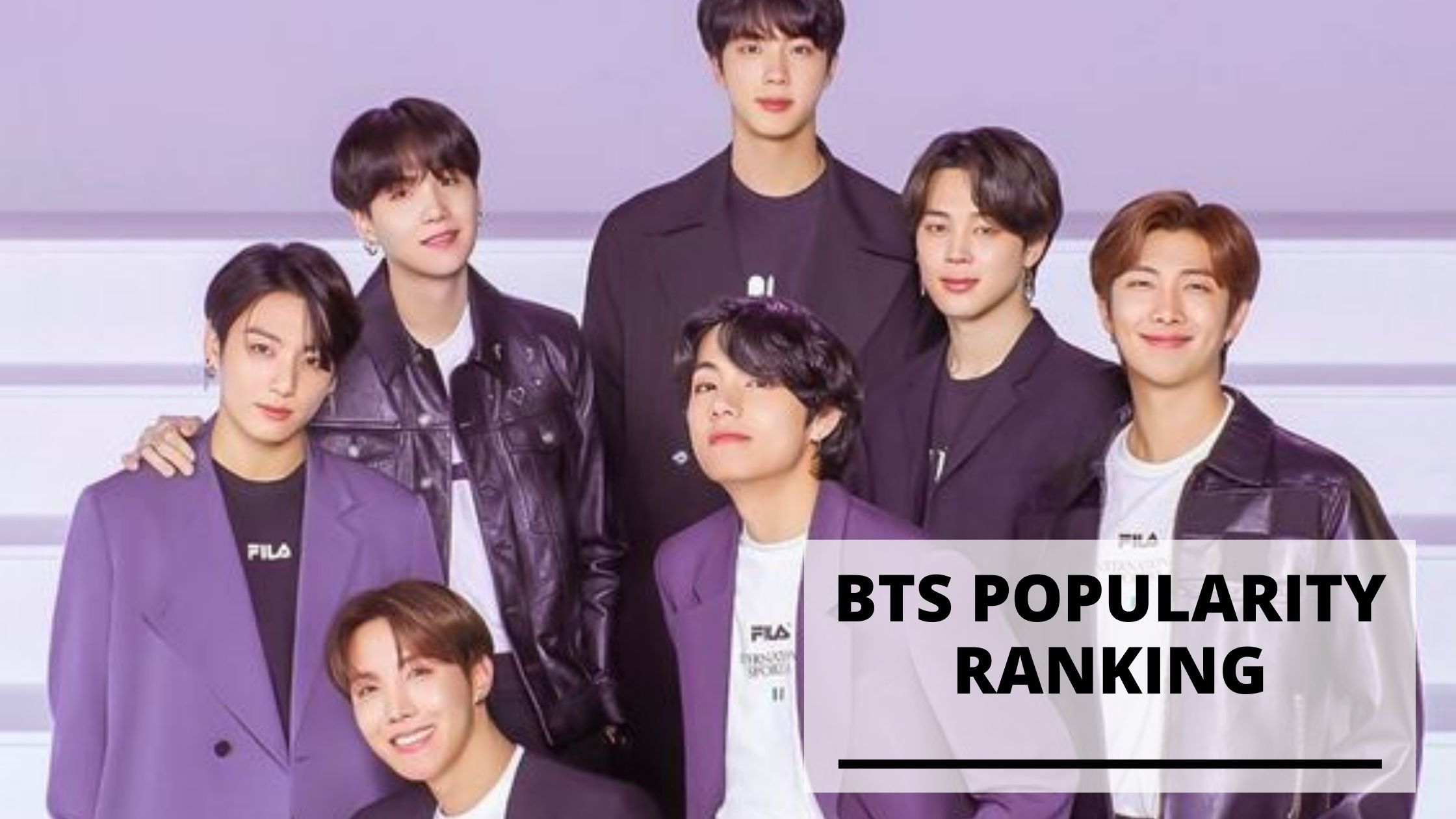 BTS (Bangtan Boys) is a Korean men’s group that exploded in popularity worldwide. Many people should have learned about BTS through their song Dynamite!

This time, we surveyed the latest BTS member popularity rankings in South Korea and worldwide.

The popularity of BTS never stops. Not only in Korea, but now they have become more popular all over the world. They continue to grow as an idol and artists.

You’ve found that Jungkook and Tete are overwhelmingly popular in South Korea. BTS is so active that it cannot be easily called an idol.

BTS member Suga also openly expresses and supports “LGBTQ rights.” Also, you can actively take songs and themes that you have avoided in the music world. There are many songs that represent oppression and prejudice.

The couple ranking of BTS has become popular, especially if fans would love the friendship or bond between two members. Though all seven members are on good terms, two members together will always shine.

Jungkook and V, who are number one in BTS’s popular couple ranking, have been famous for their good friends since their debut.

At the time of joining BTS, Jungkook was shy and couldn’t communicate easily. It is said that V broke the shell of Jungkook’s shyness.

V’s friendly and gentle, and it seems that Jungkook was more and more open to his interesting

V and Jimin are the 2nd most popular couples in BTS. These two were born in 1995 and are classmates. The two went to the same high school from the time they were trainees and were always together.

Jimin has a rather quiet personality. It seems that V was calling out when he was alone at school, supporting each other, understanding, and breathing perfectly!

Jungkook is the most popular member. He’s always trending on Twitter because of his hairstyles and hair colors.

Although Jungkook is in charge of the BTS’ visuals, he’s always making funny faces. When he’s on stage, he mostly uses light makeup.

He says he is passionate, a little reticent, and prideful. He’s always been curious to challenge anything. Jungkook is also called the Golden Manne because he can do everything from singing, dancing, and rapping well. He has an artistic side which BTS members are surprised by because of his amazing talent for drawing pictures.

See also  BTS Jungkook Tattoos - We list them all

BTS Jungkook also has a tattoo on his right hand and arm which you will probably notice when he’s singing. Each tattoo on the back of his hand has its own meaning.

Tete, also known as V, has a characteristic of a low husky voice. His singing ability is popular, which has a range of 3 octaves.

Tete has a gorgeous look, and his face is full of masculinity.

Tete is very active, mischievous, and mysterious. There is a time or place where Tete’s behavior is strange, and it’s also called a 4-dimensional, 5-year-old child.

Tete is famous for having so many friends that many say, “If Tete passes by, you will have a connection.” But for sure, because of his personality, he surely has made many friendships regardless of gender.

Did you know that Tete and the famous actor Park Seo Jun are friends?

They became friends because of the drama “Hwarang,” which is Tete’s first acting role.

In the third place of the ranking is Jimin, who has a beautiful singing voice. He is known as a hard worker and called a “practice demon” because he spent about 3 hours a day practicing.

Jimin also has an expressive power in dancing. He enrolled in the dance department of Busan High School of Arts and topped his class. He’s good at modern dance. His dance is sexy and powerful.

Jimin is a sharp dancer on stage and shows a lot of charm during BTS variety shows. He’s hard-working and sometimes shy.

Did you know that there was Jimin’s fortune tech?

He bought an apartment in November 2018.

Next to the eldest member, Jin is Suga. He is calmer than Jin and looks more adult.

Suga has been writing and composing songs since he was a teenager. He can do various things such as rap and playing musical instruments.

Suga won second place in the Korean rap tournament of Big Hit Entertainment, and that was the reason for his debut. Now, he’s involved in writing most BTS songs. He is said to be a genius at producing music.

Suga is the quietest member of BTS. He’s always that one friend that everyone can count on, so he’s called “Grandpa.”

Suga is very vocal about his likes and dislikes. He’s a manly type of person and is very kind. He doesn’t react to anything you are not interested in.

Among the BTS members, Suga has a clear and masculine personality. When a member goes shopping at a supermarket, he will always take the initiative to do so.

The oldest BTS member, Jin, comes in 5th place. He always smiles and makes everyone laugh. Sometimes, he forgets the “Hyung” in the group.

When Jin introduced himself, he was also nicknamed a worldwide handsome because of his well-structured face and tallness as a model. He looks like a prince!

Jin loves to eat and is good at cooking. He often cooks when the members are in their dormitory. He’s a bit childish and narcissistic, but he is a hard worker and always smiles. He brightens the members and is a mood maker.

It is an issue about Jin’s enlistment in military service, but there is no exact announcement yet from their management.

The leader, brain of BTS, and the rap monster, RM, is in 6th place in the ranking. BTS is said to have started with the debut of RM.

RM is known to be a caring and steady person. He likes reading, too. Despite being named King of Destruction, he is actually a solid and good person. He is a caring and wise leader of the group with a serious personality.

RM is an amazing leader who is very reliable and always there for the group. He is an English genius that can talk to non-Korean fans and do interviews without an interpreter. He is said to have a 148 IQ and is a good student.

The BTS dance captain comes in 7th place. J-Hope belonged to the dance club when he was in high school. He was a famous dancer in the underground world. He danced powerfully and had a nice suppleness too!

Even during rehearsals, J-hope gives instructions to the members firmly, and it is one of the must-haves for BTS.

Originally, J-Hope was really good at dancing, and he planned to be a vocal line. When he joined BTS, he started to rap and learn it by himself. Now, he’s also in the BTS rap line.

J-Hope is a bright person and a mood maker. He has a very positive personality and good attentiveness. Plus, he’s always cleaning up, which he is also good at. He watches over the members like the mother of the group.

BTS members’ danceability is high. In particular, their synchronized dance is overwhelming. It is really perfect and amazing enough to get goosebumps.

Believe it or not, three members, Jin, Suga, and RM, had no dance experience, but they handled it pretty well.

Why is BTS Popular?

Despite BTS’ busy schedule, they manage to reply to comments on VLive or Weverse. They value the interaction with ARMY so much.

BTS is not only a glittering idol but also open members without hiding.

Suga announced that he had a social phobia and depression, and this is very common today.

They make fans feel that they are loved and encourage them to fight and be positive.

BTS has raised its popularity not just in Korea but also overseas. This ranking is based on some articles, research, and trends online.

Now that you have found a couple rankings, member rankings, and dance rankings, we know that their music is, of course, a concept. From composition to design, all members participate in the overall production.

Let’s keep an eye on the activities of these seven handsome men.