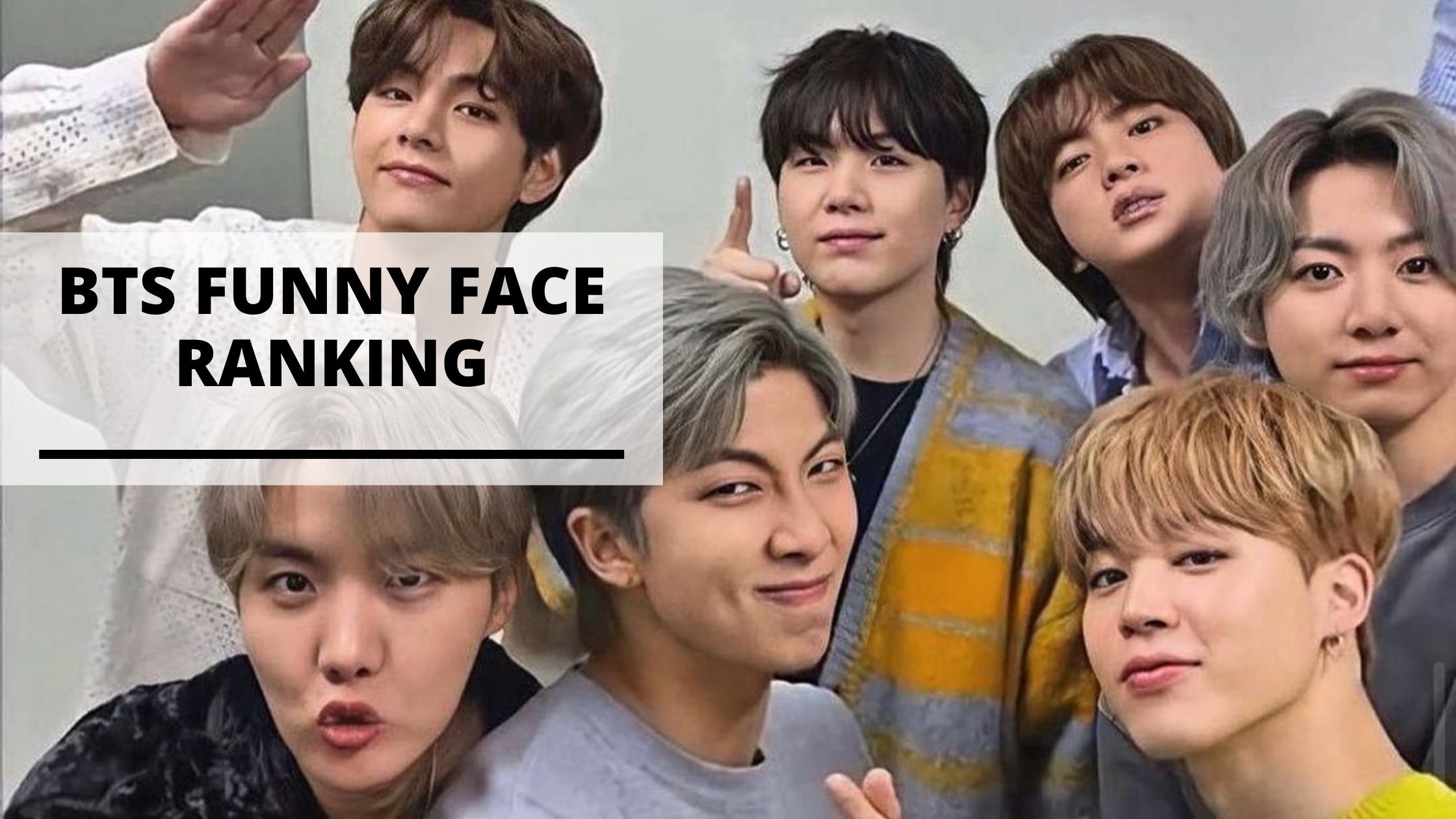 For this article, we examined the funny face images of all the BTS members and ranked them. BTS always shows off cool performances on stage, but in reality, they aren’t just about being cool. Each member has a lot of individuality. They can show high-level funny faces well without being shy.

This time it’s not the cool part of BTS. It’s funny, cute, and makes me laugh. We will introduce members who are good at funny faces in a ranking format! We have also collected a lot of funny face images of all BTS, so please have a look.

The members of BTS are all charming members. In the funny face ranking, they can go from cute, funny faces to high-level funny faces.

We will introduce the members with high face-changing skills in order. If you refer to sites such as SNS and the Internet, BTS funny face would appear as a ranked search word. In fact, BTS has many funny face images. Even though they are world-class superstars, they show a lot of strange faces.

Who is the number one member in the funny face ranking?

All 7 BTS members have attractive high-level funny faces, so some difficult points were considered in the ranking. For one, Leader Namjoon’s funny face sense is outstanding. A strong contender is Taehyung, whose beautiful face often turns into an interesting face in an instant.

BTS is very popular and highly regarded all over the world. On the American Billboard chart, they won first place many times. BTS’ momentum doesn’t stop! BTS members have been the original members since the beginning of the group. “The goal was to play an active role not only in Japan and Asia but also in the world.” BTS set a personal record for “Dynamite” on Billboard when it achieved the highest ranking ever for a Korean artist!

The world-famous BTS shows a lot of cool figures. However, the popularity of BTS is not limited to this. They can show a strange face with outstanding destructive power and a natural appearance. “I’m an idol, but forget that I’m an idol.” You can see their appearances as normal men in their twenties. They have both coolness and a high-level funny face.

Among BTS members, Jungkook, Taehyung, and Jimin are ranked in “The most beautiful face ranking in the world” almost every time. These members are also visually popular.

This time, we collected a lot of funny face images of BTS. These images are high-level destructive and funny faces that are interesting.

Let’s see the funny face images of the best BTS!

Taehyung’s funny face was revealed at the time of the performance of BTS’s popular song “DNA.” A handsome and beautiful face collapses in an instant and becomes a high-level funny face. Taehyung is really revealing everything about himself, both the cool parts and cute parts. Even when he is fooling around, he will show you everything as it is.

In their 2021 new song, Butter’s HOTTER MIX MV, the freedom of the members is terrible! It became a hot topic among the fans soon after it was released. In the MV, BTS starts singing one by one in turn. In the background, Jimin is falling off his chair and flying. Taehyung makes a funny face, but he’s still cute and angelic. J-Hope looks on point in a jacket, and Jungkook is sexy in a shirt with an open chest. In the second half, all seven members sing the chorus with a funny face.

Jin is a beloved character who always makes members laugh! He often plays with Jimin, Jungkook, and Taehyung in Manne. Jin has a high rate of sudden face changes. He often makes a funny face that makes you laugh. Even though he is a handsome guy, he is generously exploding his funny face. Looking at Jin’s funny face image, he has sharp lips! Jin also has a funny face that Taehyung uploaded to SNS without permission! Jin said he was angry because it was posted without his permission. Though handsome and narcissistic, Jin is the best who makes so many funny faces!

Yoongi often plays with the members. They say that his funny faces tend to be revealed when he is in a good mood. In performances and interviews, Yoongi has a strong impression of being cool, but you can see his funny faces in variety shows! Yoongi’s hidden funny face sense is that he also has a smart, funny face!

J-Hope is bright and everyone’s mother-like existence. He is a gentle person who watches over everyone. He is always smiling and suddenly makes a funny face! Even if no one is looking at him, his face will change. You can tell that he is a good friend in BTS!

Jimin has a cute and always smiling image. The funny face of the masculine Jimin from Busan is bold like a man! It’s cute, but it is also manly.

Taehyung has a beautiful visual without doing anything. But he shows off a high-level funny face without such a problem. He shows a funny face with destructive power that makes you forget that he is an idol. But even if he makes a funny face, you can’t hide the beauty! Taehyung’s funny face image will show off in various situations.

The funny face of the cute Jungkook is precious. There are fewer strange faces compared to other members. Jungkook was brought up by his brothers in BTS.